The David Icke of taxation* Richard Murphy has a new research paper out on how abusing limited companies might contribute to the tax gap. It's probably all bollocks given Murphy's previous and that if you were trying to pull a tax dodge, you probably wouldn't want to put any of your details on a public register. That said, he's posted some interesting stats on company filings, or rather the lack of:


• An average of more than 300,000 companies are struck off the Register of Companies each year without a formal liquidation process taking place;

• Each year, over 400,000 companies that could still owe tax are failing to file annual return forms with the Registrar of Companies, including those struck off;

• More than 340,000 sets of accounts due to the Registrar of Companies from companies that could still owe tax were not filed in 2012-13, including those due by companies struck off.

So what's my point? Well UK Uncut's company that was set up to challenge HMRC over a Goldman Sachs tax settlement has just failed to file its accounts on time. That's the same UK Uncut who bang on endlessly about the tax gap, people and companies not paying their "fair share", and lack of transparency from Big Evil Shadowy Corporations, yet can't/won't themselves comply with the fundamentals of company law - exactly what Murphy is moaning about here.

As to what this means for my favourite leftards, it's a £150 penalty for late filing and it's a criminal offence...naughty, naughty. 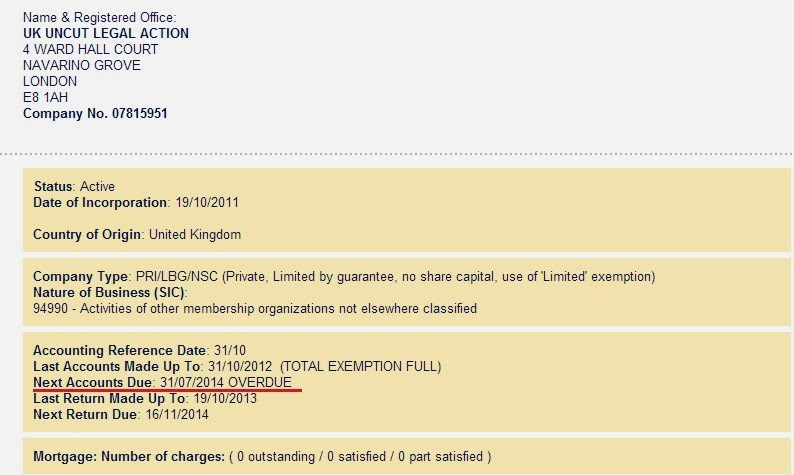 * Nicked from one of the commenters on the Graun, credit where it's due.
Posted by Blue Burmese at 07:09 No comments: