The cost of a frivolous judicial review

Perhaps some people reading this blog entry have seen my previous posts on the UK Uncut Legal Action v. HMRC case? I've been pretty critical of misleading statements by UK Uncut when trying to raise funds to cover the legal costs of a pointless court case which they lost. Here's a quick reminder of the basis for the judicial review from their skeleton argument:

8. The Claimant does not seek an order quashing the settlement itself. Simon J refused permission to seek a quashing order because of the potential effect on the Interested Parties (see [2012] EWHC 2017 (Admin) at [14] [that's two Goldman Sachs group companies by the way]). However, HMRC continues to assert that that it acted lawfully and that it would be entitled to act in a similar way in the future. This claim is brought to correct that misapprehension.

Yep, it's grandstanding with a view to giving HMRC a bollocking, but at what cost?


9. The Claimant is a campaigning group. It campaigns against the harmful effects of tax avoidance and the use of tax havens. It supports the protection of health, education and social welfare services funded by taxation. It brings this case with the assistance of a protective costs order limiting its liability to £20,000 (which has been fundraised from the public, the vast majority from numerous individual donors offering small sums).

And HMRC's costs in all of this? Well, I requested that information under the Freedom of Information Act which they declined due to the costs involved. However, they were kind enough to provide some information that they had to hand:

So if we assume that the full £20k was awarded to HMRC, UK Uncut, campaigners against government spending cuts, have cost a government department (so ultimately me and you as the taxpayer) something north of £129,000. Good job, well done.

Full HMRC response to my FoI request is below with personal information removed: 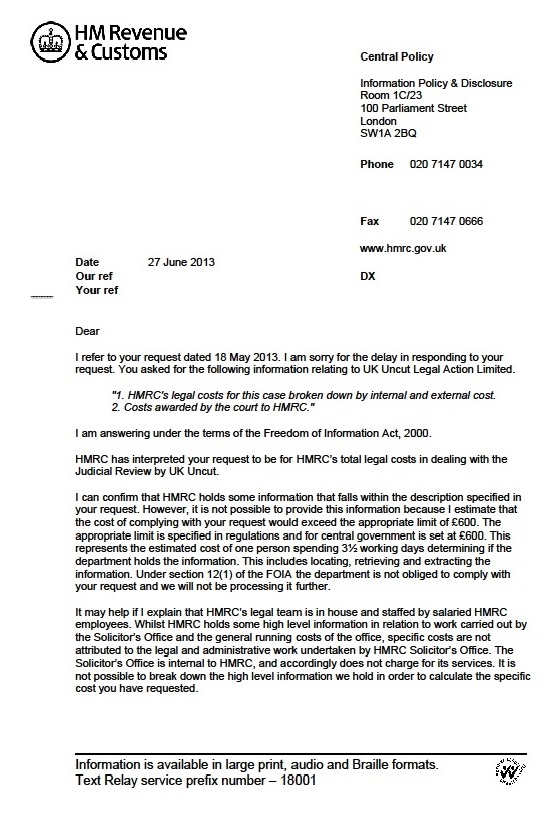 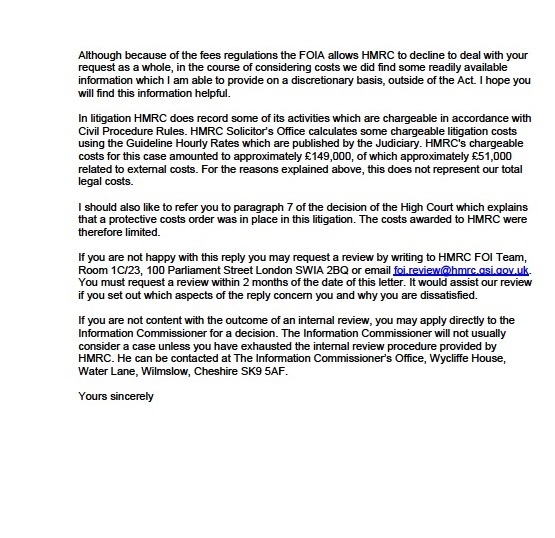 Posted by Blue Burmese at 11:48 No comments:

Some bucks from Starbucks

Starbucks have caved into pressure from bad PR and coughed up a voluntary sum of tax:

Starbucks has only reported taxable profit once in 15 years in the UK.

It announced late last year it would pay more corporation tax after a public outcry and an investigation by MPs.

"We listened to our customers in December and so decided to forgo certain deductions which would make us liable to pay £10m in corporation tax this year and a further £10m in 2014," a Starbucks spokeswoman said.

How exactly it has created a liability remains to be seen.

After waking up late and only picking up the story an hour ago, UK Uncut have issued this:


This is just a PR stunt- who is to say these funds won't come straight out of Starbuck's marketing budget? Such desperate attempts by Starbucks to deflect public pressure will get them nowhere. The government must force Starbucks and every other tax dodging company to pay their fair share, instead of inflicting brutal cuts on those least able to shoulder the burden of austerity."

And they are right about the PR stunt bit; it's money to try and kill off bad publicity but Starbucks are damned if they do and damned if they don't. It also looks like they've had a bit of a revelation. Yep, they've finally realised that it's the government who can change things so that companies pay more tax. So there's your target UK Uncut, not the companies that just follow the law.
Posted by Blue Burmese at 20:34 No comments:

So what's the problem here?

A donation to the Labour Party:

John Mills gave the party shares in his shopping channel company, JML, valued at £1.65 million in January. In an interview with The Telegraph, Mr Mills said that the donation was made in shares rather than cash so the tax on the deal would be significantly reduced.

Describing the donation as “tax efficient”, he said the form of the donation was agreed with figures in Labour’s fund-raising team.

Mr Mills said that if he had given £1.65 million from his own income he would have had to pay nearly half of that sum to the taxman.

Asked why he made the donations in shares, Mr Mills said: “To be honest with you, it is the most tax efficient way of doing this.

It seems pretty sensible to me, at least the tax efficiency part. Labour will end up with a regular income through dividends until such time as they are sold or the company goes bust. Long term, it'll probably be quite lucrative for them and make their cash flow a bit more predictable. Quite why you would voluntarily hand over a share of everything that you'd worked hard for to Labour, or indeed any political party I find rather odd though, but each to his own I guess.

The problem here though is that it's started a minor pissing match with George Osborne. It's pure politicking rather than trying to make a serious point but shows just how daft that this whole tax debate has got; that now, not taking a course of action that would maximise revenue to the Treasury is being termed tax avoidance.
Posted by Blue Burmese at 19:58 No comments: