Technology companies that hold lucrative government contracts but avoid tax could be grilled by MPs later this year.

Accounts show that nine of the largest government IT suppliers made £62billion in sales in the UK over the past five years – but paid just £527million to the Exchequer in corporation tax over that period.

The likes of Microsoft, IBM and Dell could now be probed by the influential Public Accounts Committee, which last year explored the tax affairs of Google, Starbucks and Amazon.

Committee chairman Margaret Hodge confirmed that the PAC was planning to investigate government contractors in the autumn.

And the reason for this is:

Microsoft is one of the biggest government contractors, accounting for almost 2 per cent of the entire IT budget.

In 2011 the software giant made £1.8billion in UK sales, including £700million from government contracts.

However, its corporation tax bill was a miserly £19million for the year, because the majority of its sales are made from Ireland or Luxembourg. It also funnels money to a subsidiary based in the tax haven of Bermuda*.

Its rival Dell sells PCs, printers and vast amounts of other equipment to government arms.

In the past five years it racked up £1billion in sales – but contributed only £6million in corporation tax.

It says it only made a profit of £12million, but the largest part of its income comes from commission – which is paid in Ireland.

Right, so it's the European Single Market in action again working exactly as intended; where a company can have it's HQ in one member country and trade with all other members through it.

In terms of what can be done, well there's no way that government procurement rules could exclude those multinationals with their European operations based outside of the UK from contracts such as these as it would be against EU law. So what will ultimately happen is a whole load of hot air and grandstanding from Hodge, and a load of companies left wondering if they should bother investing in the UK and creating jobs if all they get in return is a public shit-kicking for obeying the law.

* On Bermuda, if Microsoft ever want to pay any of that money out to shareholders, then they have to transfer it to the US where they will end up with a tax liability. To avoid tax otherwise, they can either invest it back in the company or leave it sitting there.
Posted by Blue Burmese at 09:28 No comments:

What could possibly go wrong?


The idea of "Suspended Coffee" is simple: When you buy yourself a coffee at a participating cafe, you also pay for a second one - which can then be claimed by someone who cannot afford it themselves.

They don't have to "prove" anything to claim one, but the scheme relies on the good faith of everyone involved.

Now I know that the intention is good and it might work in a small community with an independent shop, but the idea simply does not scale up to branches of Starbucks on the high street and here's why; as soon as word gets around that free coffee is on offer, the queues are going to be stretching out of the door and they won't be made up of just those who've fallen on hard times...

Also worth mentioning is that the idea of suspended coffee originated in Naples. Now if you go to most cafes in Italy and ask for a coffee, you're going to be brought what we would know as an espresso shot and be charged a Euro or so for it. Contrast this with our £3.50 double-skinny-soy-fuckachinos and the prospect of paying double for it doesn't look so great.

Finally, it's self-defeating as it will inevitably attract the homeless, often tragically afflicted by mental health issues and substance abuse, who just want somewhere to keep warm but will drive away paying customers. And then there will be no suspended coffee.

Posted by Blue Burmese at 13:53 No comments:

Email ThisBlogThis!Share to TwitterShare to FacebookShare to Pinterest
Labels: do-gooders, suspended coffee, the road to hell

...I've added a blogroll. This was done in five minutes of the top of my head and is work in progress. Give me a shout if you want to be added.
Posted by Blue Burmese at 22:09 No comments:

Self indulgent post, so please feel free to ignore.

It's been a year since my first blog post and here it is in all its glory. I wasn't really sure where I was going when I started blogging and I still don't, so I guess I'll just keep writing on my despair of lefty ignorance, ranting about stuff that pisses me off, and occasional oddities that interest me.

Thanks to everyone who has read or commented on my blog so far - please keep visiting!
Posted by Blue Burmese at 21:44 No comments:

Further to a previous blog post, this from the Mail:

The teenage girl forced to resign as the country's first youth crime commissioner after offensive rants were discovered on her Twitter account will not face police action, it was confirmed today.

Paris Brown, 17, was appointed to the £15,000-a-year role to help Kent Police 'stay in touch with young people' by providing their views on policing, but stepped down amid claims tweets she posted on her personal account were homophobic, racist and violent.

The teenager was questioned over the posts by officers from Kent Police's Special Branch, but the force said today it would take 'no further action' after concluding the case 'does not pass the evidential threshold for prosecution'.

Now it is worth pointing out that the police were investigating because of complaints made by the public, more than 50 of them in fact. They are duty-bound to do so, although I have my own views on how they should be dealing with similar situations. What's also worth pointing out is that:


So what it really boils down to is fifty bedwetters with nothing better to do than to waste police time have grassed up a teenager for saying "nigger" on Twitter a few years ago based on reports that they saw in the papers. What sad times we live in.
Posted by Blue Burmese at 23:59 No comments:

When UK Uncut have anything to do with it, it seems. 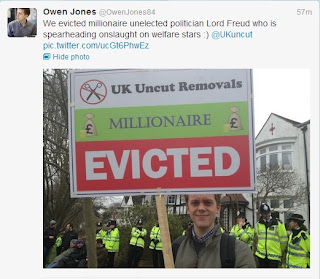 eviction (ɪˈvɪkʃ ən)
noun
the act or process of forcing someone to leave a house or piece of land by process of law.

What it doesn't define eviction as is hanging around outside someones house holding a busted placard with a misleading statement on it. Lord Freud still owns the property and can do with it as he wishes. In fact, if this Mirror article is anything to go by, Freud wasn't even in at the time:

Lord Freud owns a huge, historic country pile – one of the oldest in England – in Kent, which he uses for weekends and holidays.

Just like "bedroom tax" (which as we know is a reduction in benefits and not a compulsory contribution to government coffers) and "the 1%" (which isn't actually 1%), the left are resorting to doublespeak to get their message across. Ignorance is strength and all that.
Posted by Blue Burmese at 17:00 1 comment:

Paris Brown has thrown in the towel:


The UK's first youth police and crime commissioner, Paris Brown, has resigned from her post following criticism of messages she posted on Twitter.
The 17-year-old said she was quitting in the interests of everyone concerned, in particular the young people of Kent.
Police are investigating her over tweets she posted between the ages of 14 and 16 which could be considered racist and anti-gay

Now I have no intention of defending the youth police and crime commissioner role and the salary that went with it but what the girl has been put through over the last couple of days I find rather troubling - the press dragging out stuff that she posted online a number of years ago, the spiteful comments about her left by Mail readers, having cameras shoved in her face whilst tearfully apologising, and now the police investigation.

I don't think it's unreasonable to put the Tweets that have been quoted down to youthful folly and crude banter. We are after all talking about the ramblings of a school child and quite honestly, looking back at myself in my teenage years, I've said and done regretful things, made colossal errors of judgement, and pissed off a lot of people.

At least from all of my fuck ups, I've been able to learn something from them though. Unfortunately, the only lesson that Ms. Brown will learn here is that if you put your head above the parapet, then you'll be pulled apart in public, slagged off, humiliated, and grassed up to the coppers for your troubles. So I doubt that she will bother in future.
Posted by Blue Burmese at 22:37 No comments: